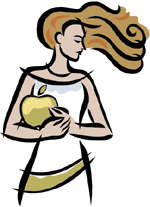 The Greek Goddess of Chaos and Discord, later picked up by the Romans and renamed Discordia. Responsible for putting all the chaos around us. Her geneology is amazingly confused (which is so appropriate to Eris that it makes one shudder), but essentially she is either the daughter of Zeus and Hera, or of Nyx, Goddess of the Night and Daughter of Chaos. (How scandalous!)

Beyond that, our main trove is a litte part of a myth about a Golden Apple. The Golden Apple of Discord was created by Eris when Zeus had thrown a wedding on Mount Olympus for Thetis the sea nymph and mortal Peleus, inviting everyone except for Eris. After Eris found that out, she crashed the wedding and threw the apple inscribed with the word "kallisti" or "to the prettiest." The goddesses all fought over the apple, but it came down to Hera, Aphrodite and Athena. They asked Zeus to decide who received the apple and he told them that Paris of Troy was to choose the fairest. Each of the goddesses offered him a gift for the apple. Hera offered him the chance to be the king of all the lands. Athena offered him wisdom and to become the world's greatest warrior. Aphrodite offered him the love of Helen of Sparta, who was married to King Menelaus. Paris of Troy gave the apple to Aphrodite. After Paris kidnapped Helen, Aphrodite kept her promise and gave him the love of his desire. King Menelaus and Helen's former suitors refused to rest until she was found. A thousand ships are launched, yadda-yadda, you know the rest. All due to Eris, the Trojan War had begun.

- known as the Doctrine of the Original Snub

The Greeks, of course, not understanding that the Eristic Principle is not only necessary but also GOOD and BEAUTIFUL and TRUE, thought that Eris was an evil Goddess and painted her as a terrible deity. Discordians, however, contest this image, though we admit that she can be kind of a bitch, sometimes. 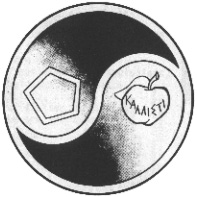 The Accelero-Convergence Observers and Actors of Eris Discordia. A Discordian Sect, founded c. 3186 YOLD, ruled with a bamboo palm by Eternally Apathetic Omnifather Jesus Buddha Chao Fenderson, K.E.C., and his High Inner Tribunal. Will you sit back and observe the Accelero-Convergence, or will you become an actor of its Will?

*As per Rule V of the Pentabarf, you are forbidden from believing anything that you read.

Please report any problems to aoaed.official@gmail.com